Because You Demanded It.

And by "you", I mean Bill Fischer, of course.

This post is dedicated to one of the most recognizeable landmarks in the greater Los Angeles area. No, I don't mean the "Hollywood" sign, nor do I mean Mann's Chinese Theater. Nossir! I'm not talkin' 'bout the Capitol Records building, the Hollywood Walk of Fame or the Venice boardwalk. You can forget about the Santa Monica Pier, Third Street Promenade and the Sunset Strip.

I am, of course, referring to Randy's Donuts. 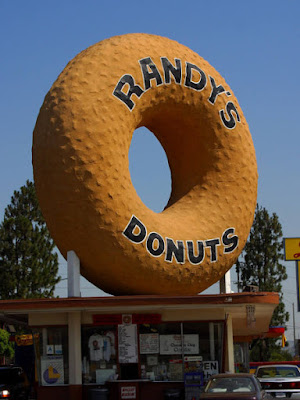 To be honest, I don't remember how it all started. And I'm not talking about how Randy started his donut shack. I'm talking about how the use of this term, and the various derivatives thereof, got introduced into the Stickmen Lexicon. I'll speculate. I remember a long time ago, possibly in a video or audio tape, Bill said "Shut your gob". I think that lead to a discussion about shutting your pie-hole, or cake-hole, which is of course a reference to your mouth. I mean, where else would you put pie or cake???

Flash forward to a Harvey Mudd party where Bill instructs me to either shut my donut, or stuff my donut. I was confused by this, as I couldn't figure out what anatomical object the donut finger was pointing to. So I asked. In typical Socratic fashion, Bill replied with a simple question: What do you and a donut have in common?? Naturally, the answer was "a hole". That's pronounced "uh hole", not to be confused with "ey-hole", which is a much more specific reference to a rear facing orafice.

And so, donut terminology weasled its way into street speak. To make matters worse, I was working in Inglewood at the time, just two blocks down from the famous Randy's Donuts. It was already famous, so it's not like it was my discovery. But the combination of the word "randy" with our newly minted meaning for "donut" was simply too incredible to resist. I don't want to spell it out for our less sophisticated readers, but basically, to refer to your donut as randy is pretty funny. And I don't mean the NAME Randy. See, it wouldn't be funny if you said you had a Michael Donut, or a Susan Donut. The fact that Randy has a meaning all its own outside of a persons name is what makes it so comical. See???

If not, you'll probably never make it as a member of the Stickmen, so best to just hang up your hat now and go back to your day job. You wanna run with these bulls?? Then shed your bell.


I don't know if this is the offical website, but it smells like it.
http://randys-donuts.com/. There's lots of good historical information on there, including a list of appearances.
l
Posted by MattMunson at 4:30 PM