It took a full week for the distribution outfit to get the new single into the hands of the all the online stores.  A bunch of that involved vetting of the file integrity and the artwork, but it still took several days after that was done, which was yesterday.

Now each store will take a variable number of days to actually make the single available for download.  For example:

Posted by Swamptooth at 12:56 PM No comments: Links to this post

Email ThisBlogThis!Share to TwitterShare to FacebookShare to Pinterest
Labels: Black and Blue 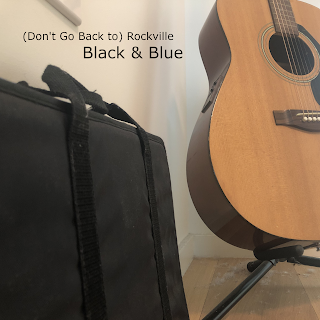 The single will be available on:
Amazon
Apple Music
Instagram/Facebook
Google Play/YouTube
iHeartRadio
iTunes
Pandora
Spotify
... and a few others
Posted by Swamptooth at 3:10 PM No comments: Links to this post


8/26/19 MATT MUNSON: This day in band history: Black and Blue are invited to Nashville to record some songs. Just now.

BILL FISCHER: Did that happen?

BILL:  'Cause I think if that happened, we'd pretty much go, wouldn't we?

8/27/19
MATT: Emailed you another mix of April. This one incorporates my notes. I haven't listened to it yet but I will tonight. Armageddon [is Here] is next in the queue. …. I just listened and honestly I think it's perfect, mix wise. There are some performance flubs, entirely on my part, but they are super minor and I don't think it's worth noodling them. I will listen a couple more times to see how much it affects me, but to my ear this mix is absolutely where it needs to be.

BILL : Awesome. I suggest holding off on Armageddon … there is a superior project file which I need to send you.

MATT: Too late sukka! But if you got it, send it ASAP; it's already in motion. …. Funny timing. He banged out Armageddon in like 90 minutes. Just sent me the first mix. I will forward to you on the off chance you want a mental break.

He is looking for a clean version of the vocal somewhere in the project folder. I guess we added reverb to it, and that is limiting his ability to do some tricks. I totally like the current mix save for the lead vocal, which I think needs some fattening up.

Question for you: if I recall correctly, I edited out an entire verse to bring the runtime down.  It's now almost exactly 3 minutes. Do you think it would be worth experimenting with the full length version? I may be remembering that totally wrong, by the way.

BILL: Very cool, but I fear you're wasting your time mixing the inferior version.

MATT: He already did it before you told me about your project file. Simple matter to just send him the latest. Speaking of … where it at sukka? If you have any other project files you like, please send 'em all together when you get the chance. This dude is fixed cost per song, and he is really fast, which is a good combo.

BILL: I will carve out time to deliver it this weekend. I really want to maintain your momentum!

MATT: And bro I totally understand that you have a million spinning plates and your attention is focused elsewhere. Heck, part of my motivation is to give you mixes to listen to, to inject some levity into your situation. They sound SO good to my ears. The dude has al the knob-turning skills that we sorely lack. To quote Bill Fischer: "Oh boom."

BILL: Oh God, are we keeping that? LOL. IRL.

MATT: Hell yeah that's my favorite part. OH BOOM!!! By the way, the name of the mixer dude is James, in case I ever call him that. He totally digs Armageddon is Here.

BILL: What's his bio? It would be cool to meet him.

MATT: He makes Batman capes, and produces music. Lol. I've asked him to hold off on more Armageddon [is Here] work until you deliver the updated project file. THAT SAID, I'd like to keep him busy, so pick a song and I will send him the project file tonight.

MATT: Done. I'll try to do you all over again.

MATT: Looks like I was wrong about Armageddon is Here once being longer. Maybe it was [The] Friend that I Once Knew that I was thinking about. Dunno. No biggie, just another problem solved.

10/17/19
MATT: I've decided "Better Off Alone" is entirely prophetic. I should have taken my own advice 30 years ago.

BILL: Ouch. Yeah, that song bites back. Chalk it up to being 100% aware of good advice all around you, and even able to write it into your own songs... but still never really getting it until the shit actually happens to you.

MATT: Ooooooo the bitter break up... you got a lot of class

MATT: Christ man, it's like we knew the future, but didn't know it.

10/26/19
MATT: Damn. Just saw this on Instagram. CLEARLY someone has already brought The Last Band on Earth to the screen... 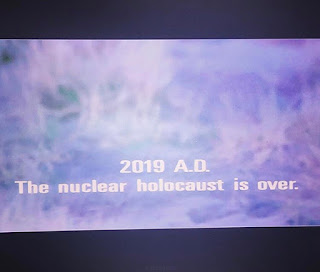 MATT: You missed your calling as a voice actor. And trailer writer.

10/28/19
MATT: It was a super easy drive and well worth it. Rockin and jockin are always in demand!

10/30/19
MATT: Hey what's the brand name of your drum kit? The one we used to record High Desert Mystery.

BILL: It's a Ludwig.

MATT: I agree. Bordered [in Black] turned out super good.  We are now tackling Rockville.  Lol. He said he wanted a challenge, and I was like "oh no you dittin."

BILL; Yeah it sounds really really great. Especially the drums, bass, and lead vocal. I think he must have fixed a few timing issued here and there.

MATT: He said it was one of our best recordings from a technical perspective. Drums were isolated well, all the tracks were clean, etc.

BILL: There are a few lines where I would mute out the backing vocal.  And flange, though awesome, seems in-your-face in a couple of places, but still a great touch. Very, very encouraging for the overall project!!

MATT: I tightened up a few timing issues and there was one I missed that he fixed. If you can give me the specifics on the changes you want, like time indices, I will pass those along. Simple fixes I'm sure.

BILL: Yeah, it made a big difference, whatever it was.  Yeah, I am making notes. Should be dirt simple. Just like mute the backing vocal on this line and that line.

MATT: Perfecto. I just listened to it again. I think it's a great sounding song with a legit pro sounding mix. All of the performances are spot on, too.  I can't believe that's me playing drums.

BILL: Seriously. Rhythm section sounds fully pro. And I actually like my main vocal now, which is weird.

MATT: Do you think your bowels can handle … twice in one day?  Mailed it to you. It's a rough mix/first draft to see if I like the choices he made. 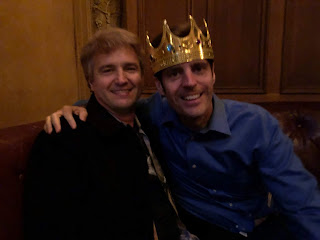 12/5/19
MATT: Lots going on, lots to report in on. Most exciting of all, perhaps, is the mixdown of Rockville has come a long way.  Our producer just sent me the latest version today. All the instruments are all where they need to be, in MY opinion. And now he’s working on MY voice, and balancing it out. And next will be YOUR voice. So the mix I have right now doesn’t have your voice in it, so it’s not very exciting, but It’s really sounding good. It sounds like an actual ... except for the shitty vocal performance (giggle), it sounds really good.  So that’s awesome.

Posted by Swamptooth at 7:21 PM No comments: Links to this post

A concert appearance powered by Classic Stickmen is just six months away today.  I can't make an announcement yet, but the wheels are now in motion!
Posted by Swamptooth at 3:39 PM No comments: Links to this post


“It’s like somebody else’s band history, but I know all the characters.”

- Don Varner
Posted by Swamptooth at 8:08 AM No comments: Links to this post

Once upon a time, in the nineties, I polled the other band members on their favorite albums of all time. Don Varner's was David Bowie: The Rise and Fall of Ziggy Stardust and the Spiders from Mars.

In hindsight, I consider it a huge lapse in judgment that at the time I was dismissive of DV's favorite album. I had borrowed his copy having never really heard it, and when I gave it back, I was honestly mostly unimpressed. Don was low key about it, but I suspect that my summary judgement was a disappointment on a couple of levels.  At any rate it was definitely an opportunity missed by the band.  But the seed was planted, and my own self conscious fandom germinated not long after.

(And that happens to me sometimes: Creedence Clearwater Revival and Bob Dylan are other examples, of where I really didn't WANT to be a fan, and my superego ended up as the last passenger on board).

So fast forward to yesterday:  I'm guessing a lot of people lie about this kind of thing, but I was actually playing Ziggy Stardust on my guitar just before bed last night, and still had the song stuck in my head when when a text arrived with the bad news about David Bowie this morning.

And I had REALLY wondered this yesterday: Why did the song's narrator just automatically have to break up the band?  The Crickets went on without Buddy Holly; why not the Spiders?

(Somewhere along the line, the Continuity Department of my subconscious apparently decided that the song was narrated by Mick Ronson.)

Anyway, Tin Machine broke up a long time ago, and good riddance.  But the Spiders will live forever.
Posted by Swamptooth at 6:26 PM No comments: Links to this post

My New Invention on FB

In case you haven't seen it: My New Invention on Facebook.
Posted by Swamptooth at 7:51 PM No comments: Links to this post

My New Invention single is OUT on iTunes and Amazon!

We cut this track live in studio, with Tru Records boss-man Robert Trujillo instigating behind the glass.  Came into the studio at his request, after we'd already finished recording our album, to do something new specifically for his compilation CD, called Live Bands in the House.  So the song was done totally live including all the little solo instruments.  Rocked like a freight train when we were recording it, very fun ... we liked it enough to rename the band after it, right then.  Hope you like it too, and don't forget to give it a bunch of stars in your review !!

Posted by Swamptooth at 9:37 PM No comments: Links to this post