I earlier made a claim that I had completed the scanning (or "digital ingestion") of the Peak Photo Shoot. Research revealed this claim to be false.

But I can now say with certainty that the task is finished.

Here's the very last photo that was scanned of the entire set. 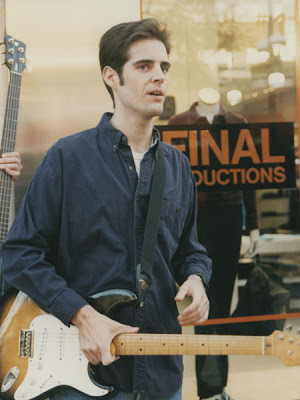 I think I have reconstructed what happened. After the photo shoot, Peak presented us with 14 rolls of film. Since we were poor at the time, Vinnie and I decided to divide the labor on film development costs. So he took 7 rolls, and I took the other 7. We both got double prints, then did a hostage exchange. So we each ended up with a full set of prints, but only half the negatives.

This is what lead me to believe that I had scanned all of the photos, as I had scanned everything that had accompanying negatives.

I suppose it's all just water under the bridge at this point, but since this web blog is all about making a catalog of all things in the Stickmens past, I thought this would qualify.

For the record, there were a total of 428 images scanned. Unless there's one or two missing, or that fell through the cracks, I think that about nails it.
Posted by MattMunson at 12:50 AM