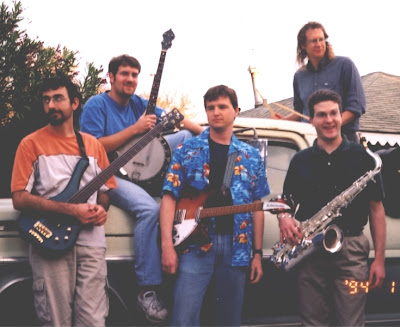 Strictly speaking, this photo belongs at classiccourtesyflush.blogspot.com, not classic stickmen, because it postdates the band by a couple of years. Don moved to Arkansas, putting a final end to all Stickmen activities, and almost immediately I started sitting in on bass with a band of engineers styling themselves Courtesy Flush.

The other guitarist stopped showing up, so eventually I was involuntarily reassigned to guitar duties. When they found out about Vic (meaning bass player, not his dirty secrets!), he was drafted too ... just in time to rename the band Ten Dollar Helmet. Notice how well Vic and I fit in. "We miss My New Invention!"

Ten Dollar Helmet went the way of The Oneders (with one fewer hit) only a few months after this photo, taken Spring 2002, not January 1, 1994. Jeez, set the damn date your camera!
Posted by Swamptooth at 7:05 PM

Bill, we need to install photoshop on your compy so you can edit the date on the photograph. I can tell from the clothing of the sax guy that this was actually taken closer to '89.

Man, file this photo under "Transparent/Evil scheme to get vinnie to post on Bills blog". Nice!!!

Still, in rare form, I'll side with Don Varner on this one. Since when were people wearing polo shirts tucked in to Dockers for a band photo? Don't get me wrong, there's plenty of shameful Stickmen photos out there, but that was a different time :)

Either way, good photo. As career misfits, Bill and Vic once again establish that the only people they fit with are MNI. :P