The "Peak" Of Our Careers

File under: Hard To Believe it's Been 15 Years.

That's right, dear reader, the infamous "peak" photo sessions were almost 15 years ago. According to the written Stickmen history (as opposed to the oral history, which is another story entirely) it was on Feb 8, 1993 that the Stickmen took to to the streets of Santa Monica for a giant photo shoot. The intention was to not only get lots of attention, but also to get photos which might be used for album artwork. Well, that's how I remember it, but it may very well be the case that we simply did it for giggles. 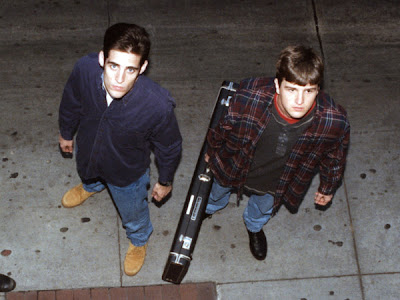 What makes this entry more interesting is that I've just finished scanning in all of the photos from that fateful day. So now they're preserved digitally. Just need to get them onto a DVD, and they'll be EMP proof too. And we're all about defending ourselves from nuclear attacks and the like. I kid you not. Now granted, we're not digging bunkers in our backyards (though Bill could be, I suppose). But there is a historical precedent of protecting stickmen history against global thermonuclear war. Years ago, Bill and I kicked off "Operation M.A.D." This acronym naturally stood for Mutual Assured Destruction, one of the hallmarks of any nuclear effort. The plan was basically to create 2 duplicate, geographically separate, complete copies of the stickmen video archives. This projet was completed on time, under budget, and with top quality. The separate archives remain in place today in Torrance and Irvine.

Anyhow, I have digressed. The point is, I'm attempting a similar effort for all printed matter. But it's not just limited to Stickmen stuff. I'm also scanning in all of the Munson family photos. It's a pretty huge undertaking, but I think one flood, fire, or earthquake will make it pay for itself.
Posted by MattMunson at 12:27 PM