"My name is Don, and these are my drums".

It was with these immortal words that the oft-maligned stick-rag "Trials & Tribulations" reached new heights. The column entitled "Don's Drums" was often the briefest, yet most amusing entry into any given issue. Darn it, I miss them! Whether he was correcting previously mis-published claims, railing on other local bands, or just being himself, Don's Drums seldom disappointed.

I was digging through some photos today, and stumbled upon this one, which is one of my all time favorite photos of Donaldo, or "Von Darner", as his evil German counterpart is known as. 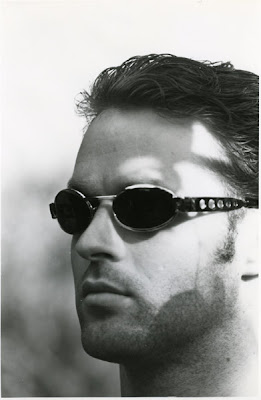 There's a great story behind this photo. But in order to keep this blog from sliding into another episode of "The Way I &*^%ing See It", I won't go into all the gories. Let's just say that this photo cost me something like 20 bucks to acquire! Also, for the record, that was THE final nail in the coffin for me on that subject.

But I digress, as I am prone to doing.

Anyhow, what can I say, Varner rocks. Though I think he and I have always had some kind of background animosity, I've always found him to be one of the most unpredictably histerical people I've ever known. I should be more clear: I think Don secretly (or not so secretly) holds a good deal of animosity towards me. Fact of fiction, I'll probably never know, but that's my read on him. There's tons of good historical reasons for Don to dislike me. Some of them based on truth, others not so much. Still, at the end of the day, Don was the backbone of the Stickmen. I've said this before, and I'll say it again, without meaning any disrespect to the other band members. Don was the most proficient at his instrument out of all of us. I sang decently, Bill played guitar very well. But Don was a stellar drummer. He played better than us faster than us. That is to say, he was good at drums a lot faster than I was good at guitar.

Don played drums a lot more than we played anything else. He was always in another band, usually practicing and performing way more than the Stickmen ever did. Good for him! It made the Stickmen all the stronger.

And yes, this is nothing but a thinly veiled attempt to get Don to post to this blog in some way... if only to set the record straight on a number of pending questions!!!
Posted by MattMunson at 6:05 PM

Matt, you bastard, I just tried to blog here, found my invitation had expired, and read this! So my revenge is postponed until high noon, or until Fischer resends the invite, whichever comes first.