In strict adherence to this years policy of digitizing everything in sight, I've just put the finishing touches on scanning in all of the photos from the Nov 23, 1995 rehearsal lovingly known as "The In-Style Sessions". 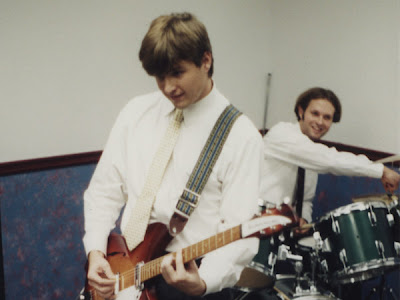 I have to admit that scanning photos is not the most fun thing a person could do with their free time. The rewards come at the end though, when all is said and done. Not only do I end up with an easily transportable and duplicatable copy of the photos, but it also makes them easier to share online and view. Flipping through pics on the PC is so much more fashionable than busting out the old cloth covered photo albums of yester year. I mean, honestly people.

All told, there were just over 185 photos in this session, totally just over half a gig of memory. Small price to pay for photos of this quality.

In other news, I have a minor retraction to print. I earlier made the claim that the Peak photo shoot was complete, and took place on a certain date. Both claims were false.

In reviewing the previously-thought-of-as-complete archive of the Peak photo shoot with Axe-grinder Bill Fischer, it became obvious that there were some photos missing. I had it pegged for a roll or two. At home, I have the photos broken down into two stacks, which I originally believed were duplicates. On stack is about three inches thick, in no discernable order. The other stack has photos broken down into batches of roughly 25, grouped with negatives. My original thought was that the big stack contained the dupes of all the photos in the other, broken down stack. Wrong. Turns out that ALL of the photos are unique. The good news is that this means there are twice as many photos to scan. The bad news is that there are twice as many photos to scan. Follow? Yup, more work. But in the end, you never win. Wait, I mean, but in the end, it'll all be worth it. 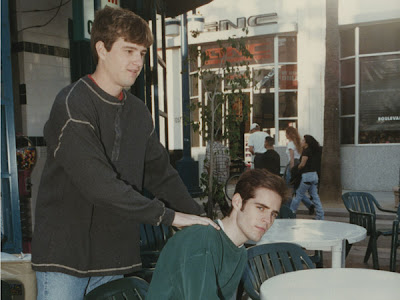 The other part I got wrong was the date. It was actually Feb 8, 1997. That's good, as it means it was only 11 years ago, instead of 15. Still, 11 years is pretty crushing. I wonder if we still look as young? Probably not. Oh well. Time marches on, and so does my new Epson scanner.
Posted by MattMunson at 7:23 PM

Maybe if you and Fischer stopped with the queer business you'd get more photos scanned.

Or maybe I wish someone would give me a backrub, too.

That's Don Varner for you. Always walking that fine line between making fun of something, and joining in on it. I like it. Two thumbs up.

A+++++ BACK RUB WAS AS DESCRIBED. WOULD DO BUSINESS WITH AGAIN!

Damn dude. That's some funny S. Wish I had thought of that. I might have to use that as my own in the future. On someone elses blog, of course.