Here's a classic from the vaults: 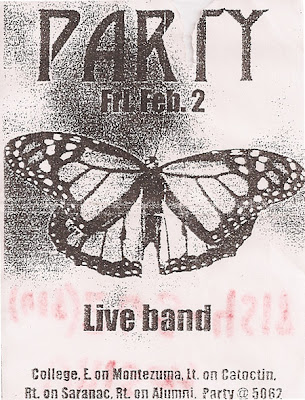 This is a flyer from a gig we played down at San Diego State University. It was in an off campus house. Totally fun gig, though for a number of reasons, it almost didn't happen. I seem to recall Bill's parents station wagon having some kind of tet-nickle difficulties on the way down.

But it all worked out great, and we were shut down by the cops after just a few songs. Still, there exists some great video from that show, some of which may be on youtube at this very moment. But I forget.

I think one of my favorite memories about this show was not the show itself, nor the fact that it was our first official closure by the local constabulary. What was fun was all the pictures and video we took AFTER the show. I still consider some of those pictures some of my all time favorites. It was a big "audience interaction" play, where we basically had a half a dozen (or was it a dozen) "fans" posing in photos with us. That was cool. The video of the gig is good also, but the part where Victor says the memorable phrase "this is over... this is over" is gold. There's also a trip into "the Dungeon" in the video, which doesn't last long.

I also recall that Bill and Don had a VERY brief exchange explaining to the camera what I am doing with the audience at that moment. Turns out, I was talking to a girl, while Bill and Don were making predictions about the outcome of said talking. What is most amusing, and is probably unknown to all band members save myself, is that this very video ended up biting me in the botox years later when Janet Fischer saw the tape, and was traumatically upset by this exchange.

Just goes to show you that Stickmen videos are like nuclear waste. It doesnt' matter how deep in the desert you bury it: it's gonna hurt someone eventually.

This was also the first gig that I can think of where someone other than a band member handled the promotion of the event.
Posted by MattMunson at 12:08 AM

I was driving down to SDSU from Santa Barbara in the '76 Chevy Caprice Classic when the brakes went out almost completely on Interstate 5 somewhere near Anaheim. I was unable to stop. Of course, no one would let me over. I finally used an upsloping off ramp and was able to hold the brakes at the stoplight on the overpass. But then the next problem was every direction from there was downhill. I took my chances with a blind right hand turn and coasted down the hill. Fortunately, I hit the green light at the bottom and then there was a long straightaway to slow down again. Wow, that was pretty stupid, but nothing bad happened. I pulled into a service station on level ground. I called Don (who was waiting for me in "the" OC) and I think he suggested we bag it, but then he picked me up in my Mom's station wagon, and we transferred equipment to continue to the house party. Good thing, too ... it was a fun show with a great crowd.

Thanks for the clarification. I forgot the details, but I can see how you would remember them. Not because of your steel-trap like memory, mind you, but because it was a near death experience. Those things tend to stay with you.