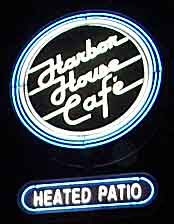 It's probably about time that someone brought up Harbor House, the defacto eatery of choice for the Stickmen, and later My New Invention. HH is a dingy little cafe style eatery in Dana Point. It's not really that it's got good food, and it doesn't really have much ambiance to speak of. But what it does have is doors that are open 24 hours, and that's really all it took to get us interested.

It became tradition to go there after local gigs, usually to debrief, and complain about what we thought went wrong. Of course, this was mainly during the early years, when we were all sort of getting along. The last time I recall going was after Edapalooza II. Was that the one with Nicole Riley? I mean Sarah?? That's the one I'm thinking of. I recall going there after that gig. Wait, we also went after Tea Time At Eds, now that I think about it, as I remember that was one of the first times my then girlfriend Wendy hung out with the band. I seem to recall her flirting with Don. But then again, who doesn't???

But this is all just preamble to the real reason behind this posting, and that's to discuss our quasi-successful attempt to fabricate slang, and introduce it into the common language. We were driving down the 5, and were just about to take the exit to harbor house when the idea when into full swing. I saw a sign that said "Doheney", and I thought "dough-hen" would be a good, cruel sounding name to call someone. That was my first suggestion. Somehow, "Scooch Cooch" came up later that night, though I don't remember the etimology of it. I may be wrong on this, but I think this may have also been the night that the term "Hot cheese, with dishes" was introduced. Maybe it was the existence of that term that spawned the purpose of the evening. I'm not sure. I think the hot cheese thing came from one of my personal favorite dishes at Harbor House, the chili cheese fries. I'd always get them with diced onions on top, and a nice big side of ranch to help wash them down. Healty treat!!!

I also remember someone out in the parking lot asking us what the heck a "Scooch Cooch" was. I thought that was pretty cool. They were so perplexed by our citi-speak that they had to inquire. That's when you know you're making progress.

Though some would claim that a guitar welt on the chest is a sure sign that you're making progress, I disagree.

That's a riff on an introduction to the Guitar Players Handbook, which I believe was penned by Ted Nugent. A quick google search unearthed the entire quote: "Practice, practice, practice. Practice until you get a guitar welt on your chest..if it makes you feel good, don't stop until you see the blood from your fingers. THEN you'll know you're onto something!" Ted Nugent

Well done. I was hoping for a Harbor House expose, and was already resigned to writing it myself. Unfortunately, I am not fully qualified on the Harbor House topic, as Victor and Matt were making the pilgrimmage well before I started tagging along. Of course my favorite HH story is when I didn't even go ... but as I climbed out of the "bac-pac" of the pickup, I requested a Rachel & Erin duet of "Damn, Wish I Was Your Lover" and left Matt to enjoy it all by himself on the ride down to Harbor House.