Here's a picture of the lead singer and full time heart-throb of the Stickmen, AKA My New Invention, AKA Finger Bouquet, AKA Question 81, AKA Imperial Probe Droid. 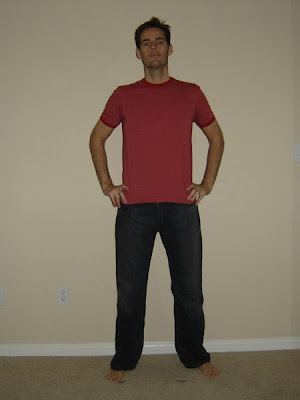 I post this here for a number of reasons. The main one is because I love to post pictures of myself, ESPECIALLY when I'm lookin' this good. But the other reason is because it's probably worth mentioning that one of the contants of the band during our 33 year run was my constantly fluctuating weight. I'd say my weight was anywhere from 158 to 225 during the course of the band, if you include Black and Blue. I know Fischer had some fluctuations also, and possibly just as extreme, though he never ended up on the doughnut side of the equation. He would catch some kind of disease, and then wither away to nothing. Often in the high sierras. Then he'd have some protien/creatine super shake immuno boost, and gain some weight back. A year or so ago, he entered what he called a "Fat Elvis" phase, where he porked up to unprecedented levels. Not quite Matt Munson highs, but pretty high for bill. I guess that's just part of getting old. And believe me, I should know, as I'm older than him. So ha!!

But anyhow, I am back in shape as of right now. I got up to 220 a few months ago. I had a string of bad luck that had me bed ridden for way longer than I should have been. Don't get me wrong, it wasn't the act of lying (laying?) in bed that made me gain weight. It was eating all the ice cream and nachos while laying in bed!! I caught a really bad flu that knocked me out for a while, then I had a back injury that had me knocked down for like a month! It was rough!!! Long story, I porked. But once I got up and running again, I dropped 40 pounds in about 90 days. Now I'm in the throes of the never ending "Buff and Bronze" quest that the Stickmen are famous for. This incarnation being "Buff & Bronze '07", or "BNB 07" for the initiated.

But enough rambling. Oh wait, that's what blogs are for. Good thing none of us are teens any more, or we could sit around and write about teen angst.

I'd really like to see a post about Bill's long term plans to repopulated the band with the next generation of Fischers.
Posted by MattMunson at 1:49 AM

In the mean time, congratulations on not "feeding your beast," although I frankly don't remember seeing the kind of gross weights mentioned above. But I'm glad to learn that all Fat Elvises have left the building, and we can get on with Good Rockin' Tonight.