Or is it strung up? I don't really have much to add for this post, but I have a picture of the newly strung "fat chick", my classical guitar that I'm hoping to use for some alt-flavor on a Black and Blue song. 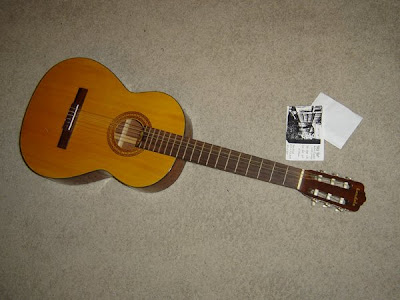 A little history for you band history buffs here. This is my third "first" guitar. Through the course of my life, i've taken three runs at learning the guitar. I got my first guitar when i was about five. There's a picture of it and me on this blog somewhere. I think. Both my sister and I got guitars as gifts. The only thing I remember about it is that it had a tartan soft shelled case. it wasn't even really a shell. It was more like a guitar shaped pillow cover with a zipper up the side. Didn't really offer much in the way of protection. My sister's had a green tartan case, I think. Mine was red. Kate's guitar got smashed on the way to America. I remember someone unzipping the case to reveal a bunch of kindling. True shame. I kept that guitar in my closet in Illinois for I don't know how many years. Never really learned to play it. Never really tried. I don't know what happend to that old guitar. Probably got sold at a garage sale or something.

Then, years later, in Jr. High, I got my next "first" guitar. It was a black Ibanez Roadstar II. It had a white pick guard. It was a fender strat copy, but was still pretty expensive. I don't even remember how much it cost, but I remember it being a bunch. It didn't have a tremelo, which I liked. I got it for christmas. Not sure exactly what year. The one thing I didn't like about it was that it had a VERY delicate finish. ANYTHING would scratch it. I remember one time I rubbed a pick around in circles on it, just as an idle motion, and it make a swirly pattern of scratches that never came out. I was in a big Jimmy Page phase at that time, as a recent album by a band called "The Firm" was heavy on my playlist. I even saw them in concert. The thing that totally got me fired up was seeing Jimmy Page play guitar with a violin bow. Under a pyramid of lasers, no less. I thought that was pretty cool, so naturally my next step was to pick up a violin bow. Bummer was, they cost about 40 bucks for the cheapest one. made of "Frog wood", if I remember correctly. Back in those days, saving up 40 bucks was pretty tough. Not only did I not have a job, but I was also a fan of squandering every penny I had on things like big gulps and star wars cards. Man, how times have changed.

But anyhow, it took me a month or two to save up. I had to special order it from the music store in Barrington, the town in Illinois where I lived at the time. It showed up, and I ran home with my bow and chunk of rosin. I wailed away on my guitar for about an hour... and then the bow snapped in half. Looks like I had over-tensed it. Nice! Now I had a project: fix the bow! I tried everything, but I guess it snapped along it's weakest point, natch. I even took it into the music store, and they tried fixing it, but no luck. So now I was out forty bucks, AND heartbroken. I remember my guitar teacher complaining about how "dead" the strings sounded. I was too embarassed to tell him they were coated in violin bow rosin. At the time, my buddy Steve and I had also read that Eddie Van Halen boiled his strings in water before installing them on the guitar, so we did that too. I think contributed to the deadness of the strings.

I sold the Ibanez to a school buddy named Randy in my high school years. I cannot remember which. I took all the money I got from the sale and promptly blew it on comic books. No kidding. But by the time I sold it, I hadn't played it in years. I played that Ibanez on and off for about six months, and then I got in a super bad bicycle accident that almost lead to the elimination of my left arm. Though I completely recovered, the three months in a cast and following re-hab pretty much threw me off guitar. I remember when I was in the hospital having my arm looked at, the doctor told me I might never be able to play guitar again. I cried!! The pain didn't make me cry during the whole process of breaking and fixing my arm, but the thought of never playing guitar again made me strike up the waterworks! COOL!!

Years later, after high school, I was attending Santa Monica College and wanted to take a guitar class. I had taken lessons with the Ibanez years earlier, but the never were really interesting. half of the lesson was spent watching the instructor transcribe some eddie van halen solo in tablature, and the other half was spent with him watching me biff my way through last weeks tab. Not so good. So I figured the "community" approach would be more useful.

I actually don't remember if I took this class at the urging of Bill/Vic, or if this was something I did prior to The Stickmen. Maybe that's a question for Bill. The question is, when he showed up, did I already know how to play guitar? I remember writing "The Immigrant Song" at Comic Quest, and that song was riffing off the very first song I learned to play at SMC, so that might help time it. I dunno. ANYHOW, when I wanted to take that class at SMC, I needed a guitar. It just so happened that my girlfriend at the time had a spare lying around, so I grabbed it off her. I think I gave her 250 bucks for it. It's a nice guitar, made in Ireland I think. It has a VERY rich sound to it, and I really like. it's a very nice classical guitar. it's taken a few hits over the years, but that was from the previous owner.

I guess that's it really. If anyone wants more guitar history, just let me know and I'll scrounge around in my memory for the details of my other aquisitions.
Posted by MattMunson at 7:30 PM